A Guide to Flying with Pets: Know the Airline’s Pet Policies Before Making Your Reservations

Home » A Guide to Flying with Pets: Know the Airline’s Pet Policies Before Making Your Reservations 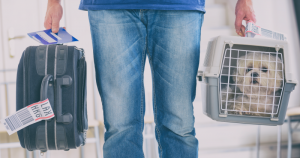 Need to fly with Fido? You should know that many airlines are tightening the leash on emotional support animals in the main cabin. But on the flip side, some airlines offer perks for flying pets.

Every day, thousands of travelers take to the skies with their pets for a variety of reasons.

In the United States, over 2 million animals fly on planes each year. Flying your dog, cat or other critter can be complicated, expensive and stressful. But many people need to travel with their pets because they are:

“The airlines are tired of people who don’t really meet the requirements for an emotional support animal because they’re the ones who cause problems,” says Sally Smith, a licensed vet tech and owner of Airborne Animals, a New Jersey company that moves pets around the world.

This past year, many airlines have updated their pet travel policies. As of December 2018,  Delta customers are no longer permitted to book travel with emotional support animals on flights longer than eight hours and almost all airlines ask for a letter or signed form from a certified mental health professional.

Starting on Feb. 1, service and support animals under four months of age will not be accepted on Delta flights of any length, and many airlines are updating their breed restriction policies. It is important to stay informed on each airline’s policies for the safety and convenience of your pets.

Note: Airlines are constantly updating their pet travel policies. Make sure you check each airline’s pet policy page prior to traveling to catch any recent updates:

For other travelers, a few airlines help offset the sometimes substantial cost by offering rewards for traveling with an animal companion. In fact, JetBlue, Virgin Atlantic and United offer pet rewards programs:

With JetBlue’s JetPaws program, members of the airline’s frequent-flyer club earn 300 points each time they board with their pet. There are conditions, of course. There’s a $125 fee, and pets must fly in a closed carrier that fits beneath the seat with their owner. The combined weight of the pet and carrier must not exceed 20 pounds. There’s a limit of one pet per passenger per flight, and pets count as a personal carry-on.

With Virgin Atlantic’s Flying Paws program, pet owners receive 1,000 club miles per pet for shorter flights and 2,000 for longer ones. The fee depends on the size of the carrier, and the destination. Because Virgin prohibits pets in the cabin, all dogs and cats must travel in cargo. That’s not all bad news: The cargo hold is climate-controlled, just like first class, and dogs and cats of all sizes are welcome to fly solo.

The United Airlines PetSafe Program offers 500 United MileagePlus award miles for each pet shipped within the United States, and 1,000 award miles for each pet sent to an international destination. This applies only to pets shipped as cargo through the PetSafe program, not pets that fly in the cabin with their owners. Rates depend on the weight of the pet plus carrier and the distance of the trip. For example, it would cost about $350 to ship a 60-pound dog to Portland, Oregon, from anywhere in the U.S., and just under $850 to send the same pooch to Paris from U.S. destinations. On June 18, 2018, United implemented new embargoes and restrictions for travel via United PetSafe.

Moving or traveling with your pet

You have three basic options that vary based on the airline, the breed and size of your pet and even the season:

If you are flying with an in-cabin pet or checking your pet as baggage, you have to make arrangements directly with the airline, Smith says. If you’re flying your pet as cargo, you can use a professional pet shipping company.

In fact, certain airlines don’t accept animals directly from the public for international shipment, she says. Why? Because the requirements for paperwork, health records, crate specifications and other details can overwhelm a pet owner not familiar with shipping pets.

“There are way too many things that could go wrong,” she says.

Flying with a service or emotional support animal

If you have a trained service animal or an emotional support animal and bring proper documentation, you can fly with your animal in the cabin as long as it doesn’t cause a ruckus or block the aisles.

For example, a service dog might pick up items, pull a wheelchair or warn of a seizure. An emotional support animal does not perform specific tasks, but may comfort a person with conditions such as anxiety or depression.

Unlike the Americans with Disabilities Act that covers U.S. life on the ground, the ACAA recognizes both types of animals as service animals.

However, the ACAA does allow airlines to ask for additional documentation for emotional support animals as well as for psychiatric service dogs, which may be trained service animals.

In contrast, airlines can’t request additional documentation from passengers with (non-psychiatric) trained service dogs unless their verbal assurances that the animal is a service animal are deemed “not credible.”

Airlines are allowed to turn away any animal that is too big to safely travel in the cabin, disrupts cabin service, poses a health or safety risk, or isn’t allowed to enter a foreign country. And airlines also can reject certain types of creatures, including snakes, spiders, rats, ferrets, sugar gliders and other exotic animals.

If you plan to fly with a pet, or a service or emotional support animal, it’s crucial to check restrictions and requirements before you book and notify the airline as early as possible to reduce your chance of having your animal turned away at the ticket counter, like that peacock.

And if you’re shipping a pet internationally, it’s a good idea to start planning about six months early, Smith says. “You can’t just call someone two days ahead of time and say, ‘Can you book my pet?’” she says.